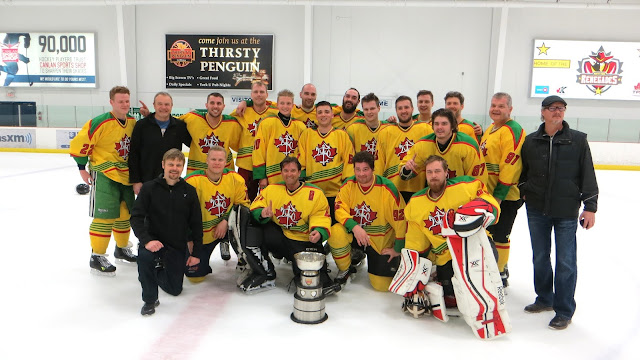 We beat the combined Latvian-Estonian Team 5-1!!! 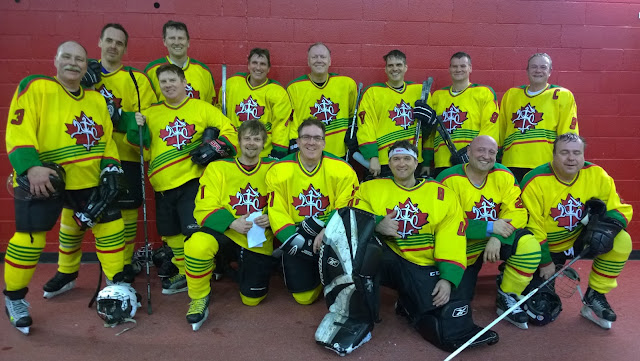 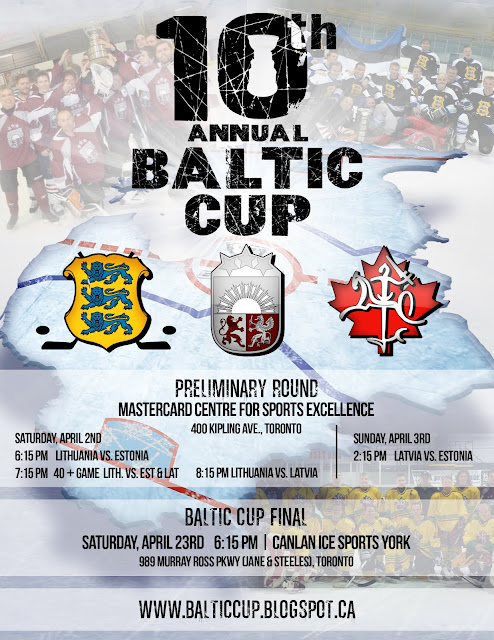 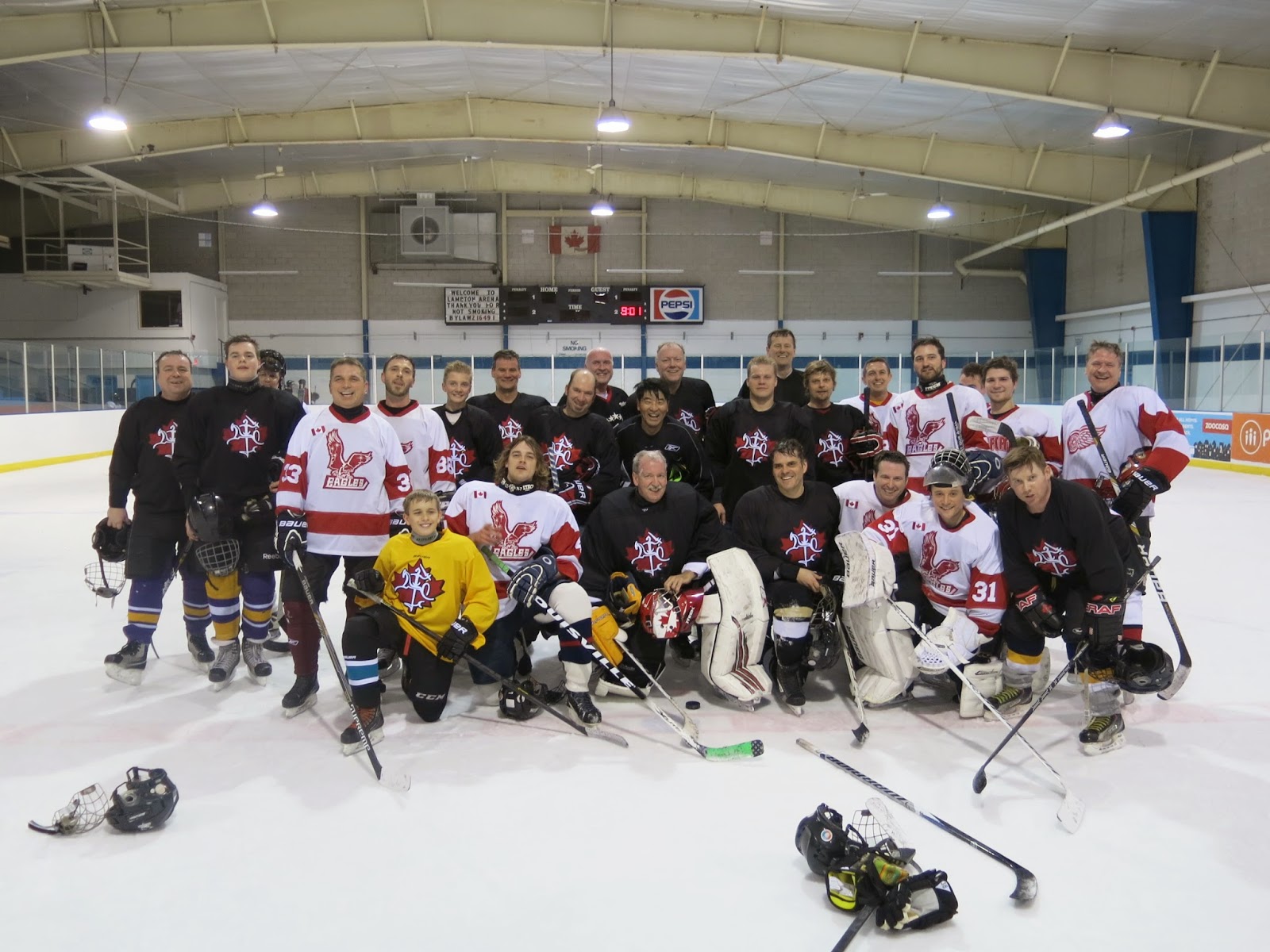 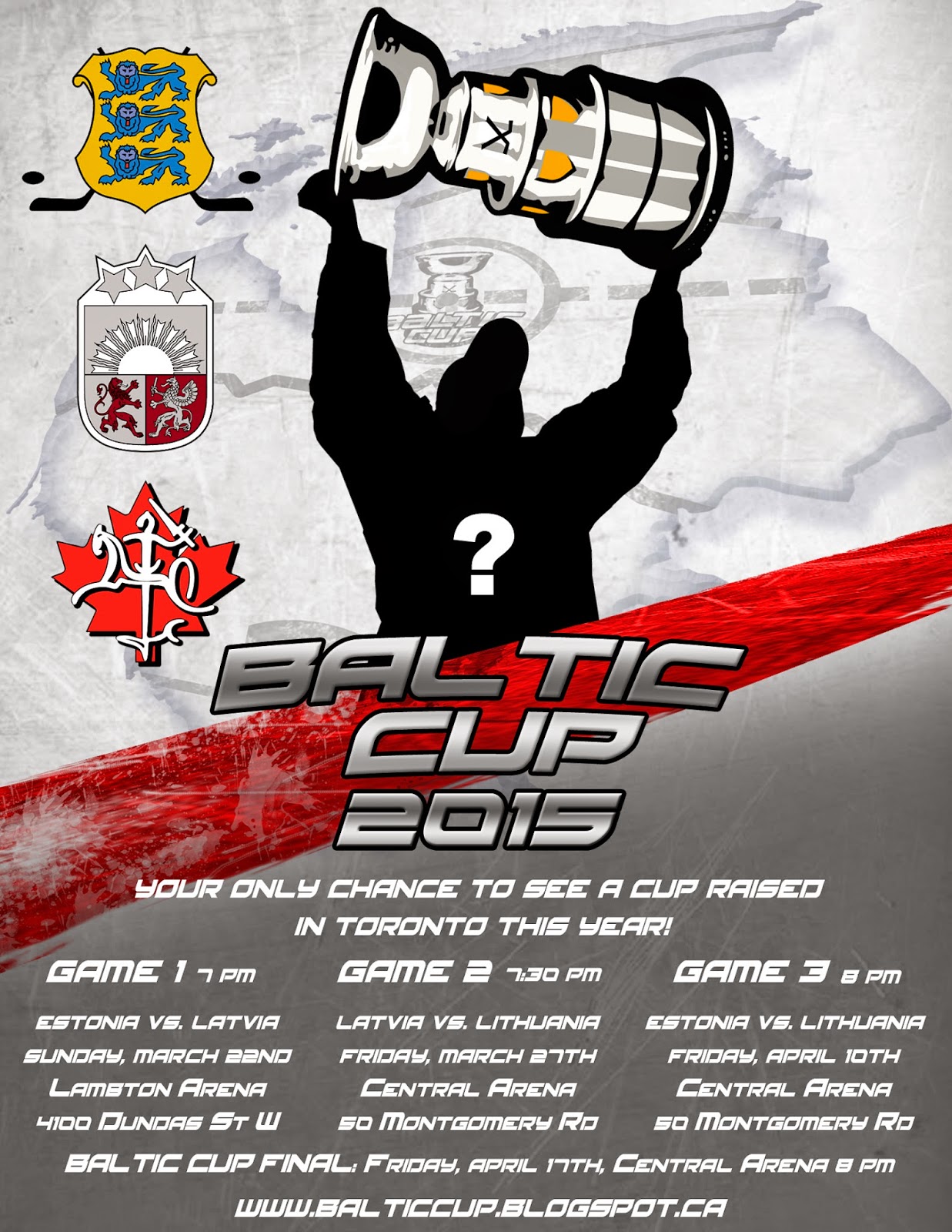 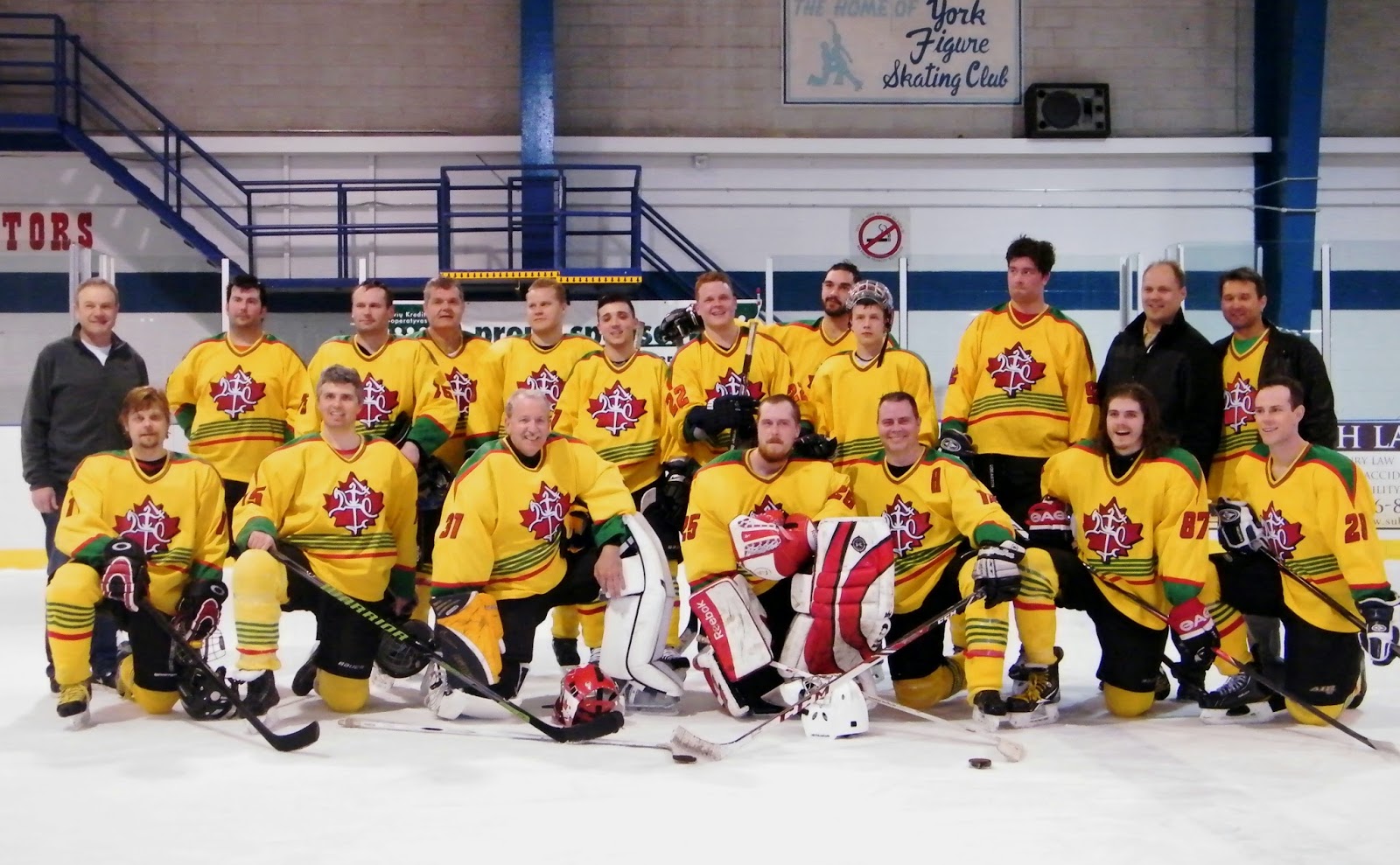 Made it to the FINAL game this year!
Lost 5-3 against the Latvians, Ben Cottreau got a Hattrick! 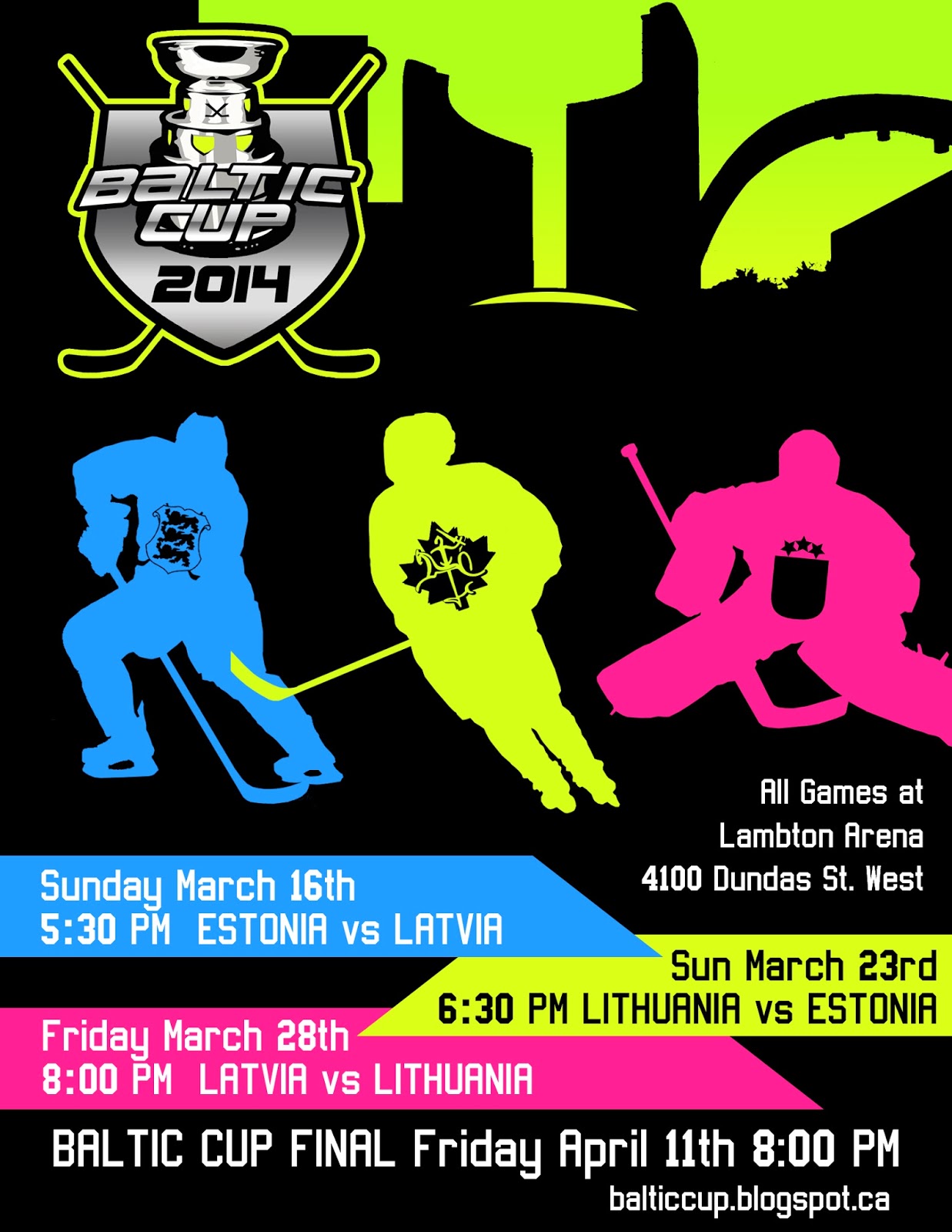 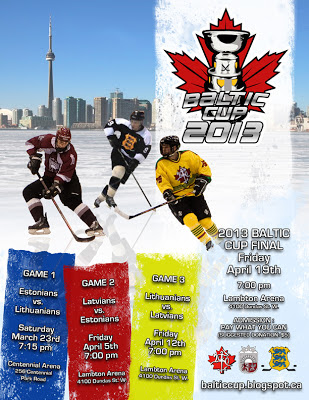 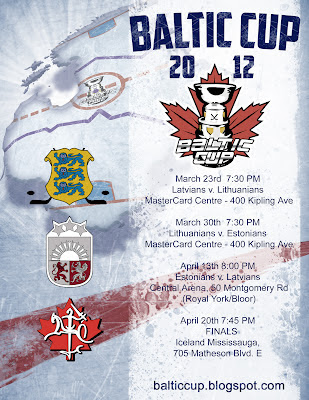 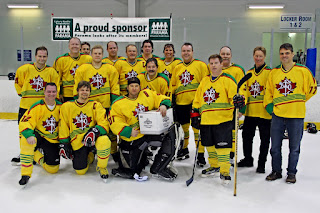 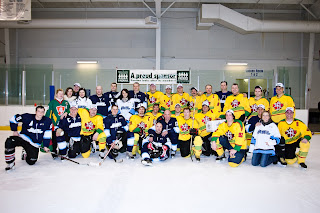 Here is the link to book the HOTEL…

http://embassysuites.hilton.com/en/es/groups/personalized/D/DTTSFES-LIT-20120224/index.jhtml?WT.mc_id=POG
We swung a deal at $75 a night for a 2 double bed suite, that’s only $37 each a night!

Here are some of the photo's...
http://valiooo.zenfolio.com/detroit-2012
No comments: 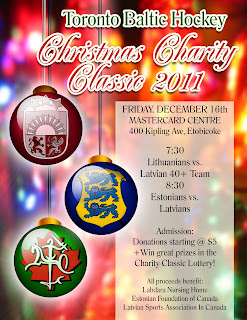 First spare to comment/post at Midnight Thursday March 1'st to get FIRST in for Week 23!!!
No comments:

Thursdays at 10pm on Rink #2 at the Hershey Centre!!! Starting September 29'th!
No comments:

First ever "OVER 40" game against the Latvians!!! 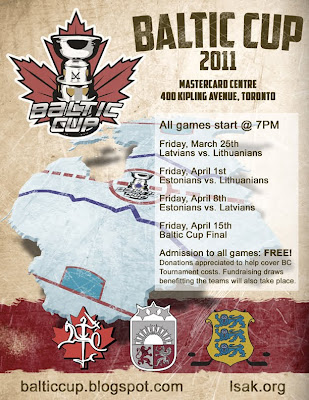 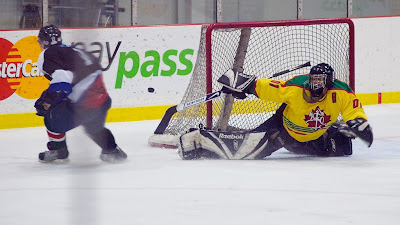 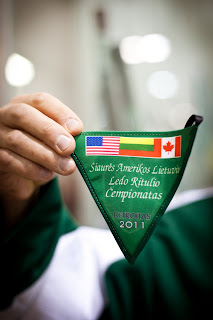 The Detroit Lithuanian Hockey tournament was a great success! We met the Chicago "Baltics" team at the halfway point in good ‘ol Detroit! It looks like it's going to be an annual event.
Many thanks to Kunigas Gediminas Jonikas for singing the Lithuanian national anthem and saying some kind words. Thanks also to Chicago and Detroit's team captains and organizers for their generosity and helping make this event possible. 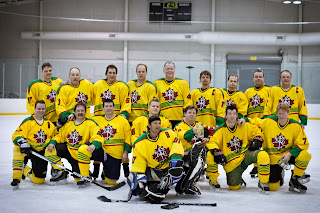 The Embassy Suites Detroit - Southfield hotel provided everyone with terrific service and hospitality all weekend.

The party with DJ was at 7:30pm at The Pub Restaurant http://thepubsbg.com/ and we all had a great time there.

Exhibition Game against the Latvians!!!

SPARES post a comment AFTER MIDNIGHT Thursday night March 10'th to get first IN for the LAST GAME March 17'th!!!... 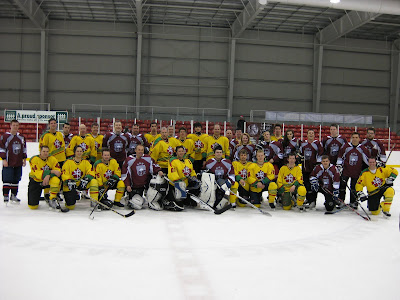 All games will be played at the Mastercard Olympic Ice Pad.

Exhibition Game against the Estonians!!!

We finally WON a game against the Latvians!!!

Just want to THANK everyone who participated in the charity game on December 18’th! We FINALLY won against the Latvians!!!!

It was an incredible game! We were down 3-0 in the first period and we actually came back and won it 7-6! It was a hard fought game and the last minute of the game was a nail biter! The fan turnout was great for both teams and the new mastercard centre was a perfect pad to play on. 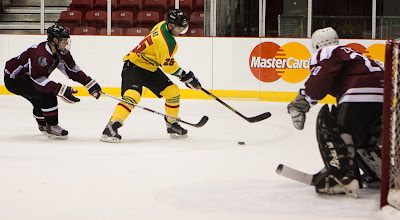 After taking a 2 year hiatus, Brian Mielko came back full force & scored a HATTRICK that night! Mike Mazeika shook the monkey off his back and finally scored not 1 but 2 goals that night. As always, Steve Podsadecki scored a goal and so did Rick Dresher. There were soooo many assists that night but none were recorded but I’m sure Derek Smith had a couple. Everyone played great and Danius Lelis played awesome in net! 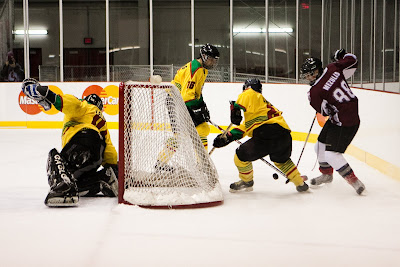 We raised $300 for the Labdara Lithuanian Nursing Home that night from our team alone!Everyone one who participated donated $10 and we had 4 penalties that night so those guys donated an additional $20 each. Matt Bonner had 2 penalties and Tomas Girdauskas & Romas Biskys had one.

The Maple Leaf bar afterwards had great wings, good service and a great setup! Overall this game night was a success! 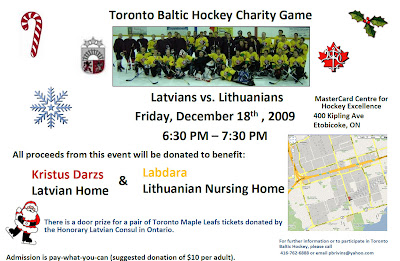 Next up, the BALTIC CUP PLAYOFFS...

The playoff schedule is as follows:

Mark these on your calendars and come out to support your team!
No comments:

Sorry to our fans for the short notice regarding this game. It was a Baltic Cup qualifier game organized by the Toronto Estonians on Friday Feb 27, 2009. 6 - 7:15pm at Centennial RC (Scarborough). Great ice given the rink time shortages throughout the GTA!

The Estonians were a bit short staffed and many thanks to the four TKL'ers that jumped over to the dark side to help them out! The score was tied at 2 after one period, 4-3 TKL after two and we traded a few goals in a hard fought third.

Most notable was the great effort on the part of both goalies, mainly TKL's Jonas Kurpeikis who took a couple hard shots off the clavicle and had some serious welts to take home as his souvenir along with his second Baltic Cup win. Stewart Pitchford filled in for the Estonians and did an admirable job snagging his share of shots too.

Also of note was Mike "Shakes" Mazeika finally breaking the ice - more like opening the floodgates - to rifle in 4 goals! The other TKL goals were scored by Alvin Kišonas and Rick Dresheris.

Here are a couple of game photos...

Another close one against the Latvians! 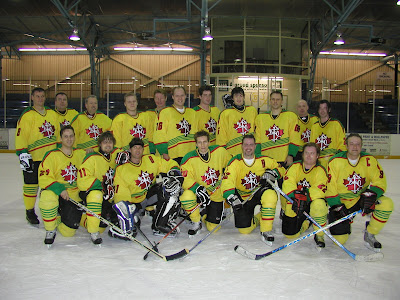 AWESOME Baltic Charity Game yesterday!!! It was for a great cause and the Labdara Nursing home really appreciates it.

Even though we didn't win, we sure came close to winning our first game against the Latvians. We scored the first goal and we were leading late in the 3'rd with a score of 3-2.

The final score was 4-3 for the Latvians and would of won it if only we didn't have 3 men in the penalty box during the last 3 minutes! The Latvians tied it with 3 minutes left on a power play with the go ahead goal while we were down two men with one minute remaining.
Steve Podsadecki scored 2 goals and Alex Butkus scored the other. Our youngest player Brendan Butrimas played in his first baltic game and made a beautiful assist. Danius Lelis played terrific in net! 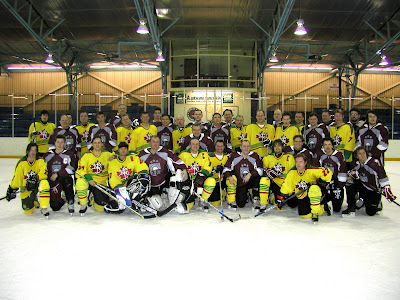 Nice work guys and AČIŲ to EVERYONE who participated!
No comments: 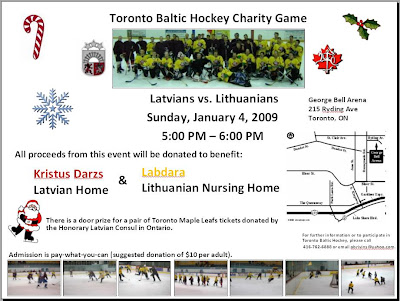 Our first game of the season is scheduled for January 4, 2009, 5PM at George Bell Arena. Click the image for more information.

Festivities after the game will be held at Lokys.

This is a charity game so please donate generously since all proceeds go to the Seniors home!
No comments:

We're back again every Thursday at 10pm at the Hershey Centre starting September 25'th and Ending March 12'th. Exception dates are December 25'th and January 1'st.
No comments:

Thanks to the Toronto Lithuanian Golf Club (TLGK.ORG) and club President Linas Saplys (at left in below pic) for allowing the TKL to join their golf day at Harborview on June 21st. Ten TKL hockey players joined in and had a terrific day, loads of laughs. Here's Alvin handing out one of many prizes generously donated by TKL players (check out the first-rate prize table!), this one handed to tournament winner and TLGK member Vic Kaknevicius who shot 75 with Steve Podsadecki in second place with 78. Eddie G won one of the closest to the pin prizes in the 57 golfer field! Numerous door prizes and a putting and chipping contest added to the fun. Larry teeing it up. In the above photo, Mike Mazeika, Steve Podsadecki, Eddie Gincauskas, Chris Sturmas, Jurgis Kairys, Alvin Kisonas and, all the way from Ottawa, Joe Radzius. Also at the tourney but not in this photo are John Mazeika and Larry Richardson.

We hope to see more TKL'ers and our Baltic hockey friends join in next year! 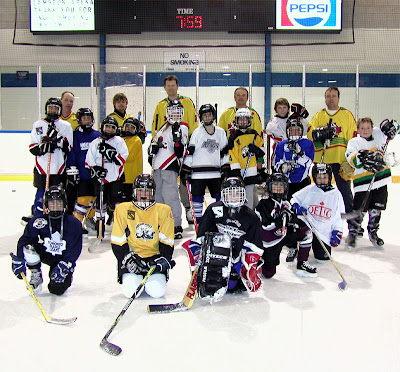 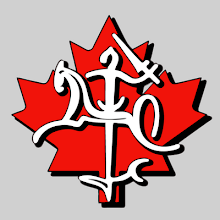